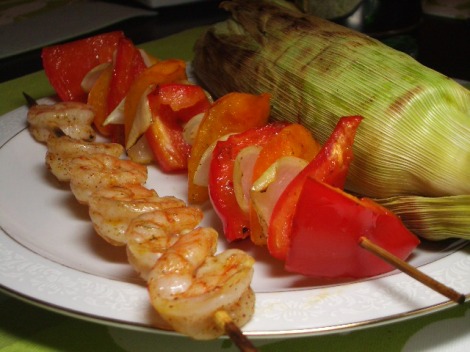 -Salt and pepper to taste

Peel the shrimp and cut your peppers and onions into bite-sized skewer-appropriate pieces.  Skewer the shrimp and peppers.  As you can see, we put them on separate skewers to maximize the shrimp’s exposure to the marinade.  You could also mix and match between the veggies and the shrimp.

In a small bowl, combine the olive oil and spices.  Whisk in the lime juice until it’s incorporated.  Put the skewers in a shallow baking dish (with sides!) and pour the marinade over them.

If you’re using a charcoal grill, like we do, you’ll probably want to get your coals going early to get it nice and hot.  If you have a gas grill, you’ll want it hot, too, but it won’t take as long.

Once the grill rack is hot, add the peppers first.  Let these cook about 4 minutes on each side before adding the shrimp.  Add the shrimp and cook an additional 2-3 minutes on each side, or until they’re done. You can brush on extra marinade from the pan while they’re grilling (*but not right before you take them off- remember that marinade is part raw shrimp juice. You’ll want it to cook enough!)

Remove from the grill, serve with the skewers on a plate, and ENJOY! (Best eaten outside, if possible.)

OPTIONAL: CORN ON THE COB

Take two ears of corn in their husks.  Put them on the grill about 10 minutes before the peppers.  Turn occasionally.  Take them off when you take everything else off.  Enjoy with butter, salt, and pepper.

(And since Merab told us about this simple and delicious way to enjoy corn, we’ll also recommend a little old bay seasoning on the corn if you’re feeling particularly coastal/beachy.)

One response to “Ancho Lime Shrimp and Peppers on the Grill”