This is not a real recipe, but more of a conglomeration of previous recipes. We generally find that one whole recipe of cinnamon buns or cinnamon dough bites is WAY too much for brunch/breakfast, even when we have company. We certainly couldn’t just let them go to waste, so with a minor addition, they become a delicious dessert!

As a disclaimer, don’t start on the first part of this recipe without making the cinnamon buns/bites first. You’ll be sorely disappointed when it comes time to add ingredients to your dessert bowl that you don’t have! 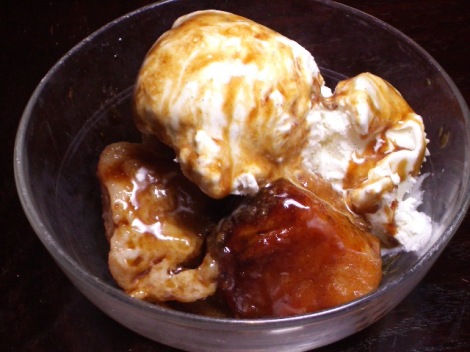 1/2 cup kahlua or other coffee liquor

Over medium heat, reduce the liquor/wine mixture until thickened and about 1/4 or less of its original volume. You almost want it to be a syrupy consistency. Let it cool a bit and get together your other ingredients in a bowl:

Now that you have your desired portions in the bowl, take a small spoon and ladle out the reduced kahlua over top of your ice cream. Serve and ENJOY!

2 responses to “Breakfast for Dessert with Kahlua Drizzle”