For various reasons, we’ve officially declared this month to be Frugal June.  While some of these reasons are, of course, financial, we have other motivations that are more fun.  We realized recently that we’re cooking a lot less than we used to.  You’ve probably noticed it here on 2frugalfoodies with the slowed pace in postings.  2 jobs means 2 salaries for dining out and it also means less time… that’s a dangerous combination for cooking.

We also noticed that when we do cook, we rely on a handful of easier dishes that we can make with whatever we have on hand: Vegetable thai curry, pasta and shrimp dishes, Asian marinades, and other delicious, but predictable dinners.  One of the hardest parts of being in a cooking rut is realizing it, I guess.

This month, we’re going back to the old playbook, and we’re having a blast.  When we were halfway on the student schedule, we could just look at a recipe in the afternoon, get anything we needed at the store that day, and go from there.  Now, it’s a bit more complicated.  We plan meals by looking through our favorite cookbooks and old magazines on the weekend, and then make a trek to the Dekalb Farmers Market on Sunday afternoon.  There, we proceed to get an incredible amount of fresh produce and top-tier proteins, while still being very frugal.  It’s a win-win.  We’re stocked for the week, ready to cook recipes we’re excited about that push our cooking and tastes into new directions.

One of the real winners this week was a dish with roasted fish (we used Hake instead Haddock) and potatoes with a puttanesca sauce.  We made a double batch of the homemade sauce, and we’re planning a simple, but delicious meal of bucatini pasta with the sauce accompanied by bread from Alon’s bakery.  Here’s the original recipe, which makes enough sauce for the meal for 2 and then some more for later… 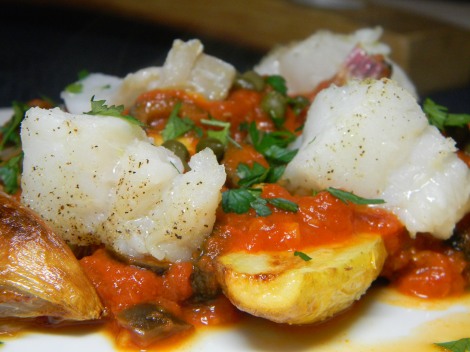