Just down the road from the market that mainly focuses on Asian cuisine, there’s a latin market, and we went to explore that recently.  Though it was much smaller, it also had lots of interesting ingredients and even had a butcher and meat counter.  Though I’m sure most Spanish-speakers that I encounter hate this about me, I love to practice my Spanish whenever I’m given a chance.  So, I struck up a conversation with the butcher and he recommended some beef that he was preparing in a traditional Mexican marinade.

We bought a few pieces and brought them home.  He recommended cooking them on the grill, but as cold as its been, we cooked them on the stovetop and then transferred them to an oven to slow cook in those delicious juices.  Seriously- it’s one of the best pieces of beef I’ve ever had: 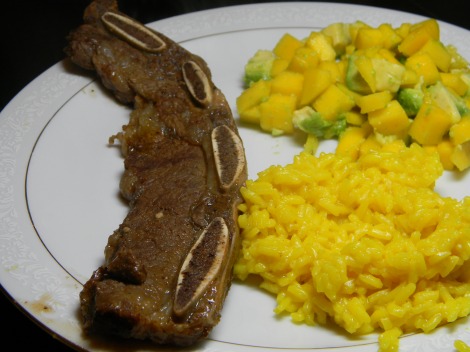 Since we don’t know the recipe for the beef (except finding a latin market and asking the butcher if he has any Mexican-marinated beef), we thought we would also include a recipe for the avocado and mango salad that we had with the beef (and purchased the produce for in the Latin market!)